With only 5 weeks until Summer officially starts in Australia, this is our TOP 5 things to do when staying in Byron Bay

Imagine kayaking up close with dolphins, whales and turtles within a beautiful marine park, whilst learning about local history and listening to local Indigenous stories. Or surfing your kayak on one of Byron Bay’s famous waves.…

Ask us at Aabi’s at Byron how to book direct upon check-in. Go Sea Kayaking can also pick you up from  our reception area. 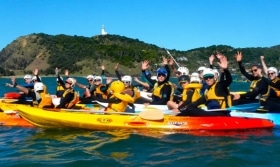 Skydive at Byron Bay’s closest beach skydive for the ultimate adrenalin rush. You’ll drop from an extreme altitude of up to 14,000ft and freefall at over 200 km/hr for up to an insane 60 seconds, then float under canopy over Byron Bay for 5-7 minutes soaking up spectacular beach and hinterland views all the way to Brisbane, the Gold Coast and beyond.

Skydiving Byron Bay is the skydiving experience of a lifetime – so escape the ordinary and live life on a high with our friendly Byron Bay skydiving crew. Once you’re back on solid ground, relive the thrill over and over again with our awesome video and photo packages! 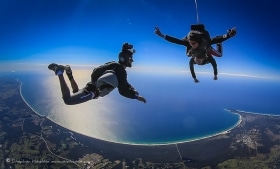 Next time you book with us at Aabi’s at Byron consider a visit to The Farm Byron Bay. The Farm Byron Bay is big on sustainable farming and getting back to traditional methods of growing food for the community. They are 100% spray and chemical free. Their ultimate goal is to Grow, Feed and Educate, and The Farm provides a space for all of these elements to come together with our farm residents, Three Blue Ducks Restaurant & Cafe, The Bread Social, Flowers at The Farm, and Fork in The field. There’s lots to do and see. Take a wander around the place and check out the farm animals, stroll past our paddocks and treat yourself to something nourishing from the café and farm shop. Come and pick up some farm fresh flowers, meet Angus the chook, have a coffee from Three Blue Ducks and take home a loaf of amazing sourdough steaming from the oven by The Bread Social open from 7am 7 days a weeK 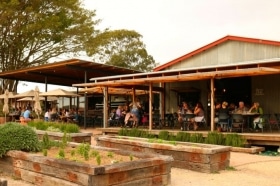 Constructed of prefabricated concrete blocks in 1901, the Cape Byron Lighthouse stands on the most easterly point of the Australian mainland and is Australia’s most easterly lighthouse. It is built in the James Barnet style, by his successor, Charles Harding. James Barnet, the New South Wales colonial architect, was renown for his towers having large ornate crowns and are easily distinguished.

The first-order optical lens, which weighs 8 tons, was made by the French company, Societe des Establishment, Henry Lepante, Paris. It contains 760 pieces of highly polished prismatic glass. The original concentric six wick burner was 145,000 cd. This was replaced in 1922 by a vapourised kerosene mantle burner which gave an illumination of 500,000 cd.

In 1956, the light became Australia’s most powerful, at 2,200,00 cd when it was converted to mains electricity. At the same time the clock mechanism was replaced by an electric motor.  An auxiliary fixed red light is also exhibited from the tower to cover Juan and Julian Rocks to the north east.

A great banquet was arranged for the opening in 1901 and many dignitaries, including the NSW Premier of the day John See, were invited. However due to adverse weather conditions the premiers ship was delayed by till the following day and the banquet was held without him. The opening by the Premier took place a day late on the Sunday. It is interesting to note that Cape Byron was named by Captain Cook after John Byron, grandfather of the famous poet.

Preservation The ownership of the reserve was handed over to the Parks and Wildlife Service of New South Wales in 1997. The reserve was already under a lease to the Cape Byron Trust who maintain and secure the site and buildings. It is currently used as a base for whale watching.

TOURS: Imagine yourself in the lighthouse keeper’s shoes on this tour of the famous Cape Byron lighthouse Take a step back in time and discover what the daily duties of the lighthouse keepers and their families at Cape Byron would have been like on the Historic lighthouse tour. See the signal flags and the keepers desk and uniform, providing a reminder of days gone by when three families were living at Cape Byron from 1901 to 1989. Enjoy climbing the tower, stopping at each of the three levels before stepping out onto the top balcony to get a birds eye view into the marine park below and surrounding hinterland. 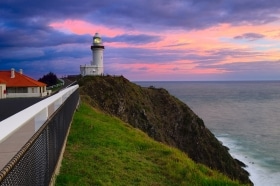 Byron Bay’s Community Market, held at the Butler Street reserve, is one of the best in the region. Covering several acres, the market offers a vast array of handcrafted wares, locally-grown produce, and artworks of every kind. It’s best to get there early and allow a few hours to take in all the stalls, indulge in some fresh food and culture.

When: 1st Sunday of each month. 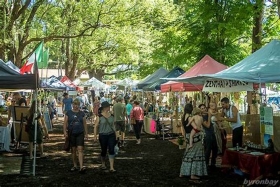